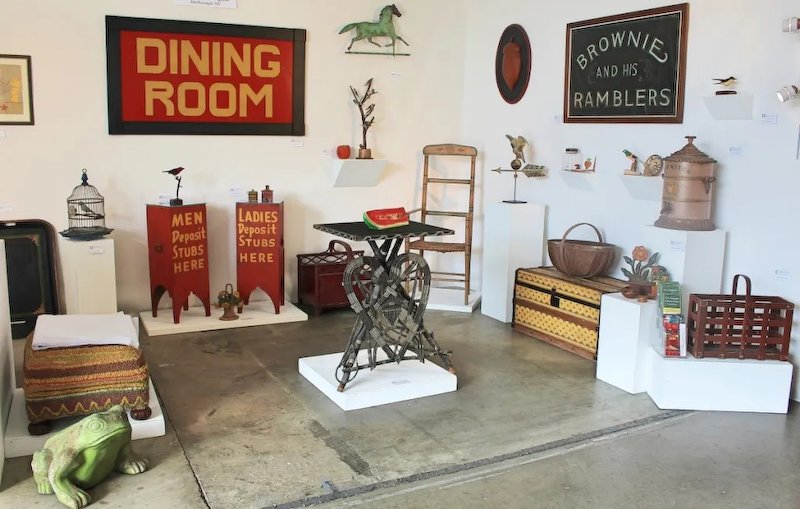 RHINEBECK, N.Y. – Barn Star Productions once again opened the gates at the Dutchess County Fairgrounds Columbus Day Weekend, October 9 and 10, for the fall Antiques at Rhinebeck Show and Sale, the second show of the 2021 season following its successful spring show in May, which was the first event to take place in more than a year and a half at the fairgrounds.

Both spring and fall editions of this popular show have flavors all their own, and for this weekend a total of 130 vendors, a few sharing booth space, crafted displays of antiques and art that hearkened to hearth and home as thoughts turn indoors and the weather starts to chill.

From the time the show opened at 10 am on October 9 to its close at 4 pm on October 10, commerce was as brisk as the promise of autumn days and nights outside.

“Rhinebeck is one of the very few great shows left that only get better with time,” enthused South Hadley, Mass., folk sign specialist Victor Weinblatt, who was able to demonstrate the ultimate proof of this observation with his sales results. “Our first sale, in the opening minute of setup, was both historically significant and part of my family’s history. Purchased by my grandfather in the 1940s, the circa 1890 sand paint and gilt sign identified the New York City neighborhood where I grew up. One might say that folk signage was in my genes.” 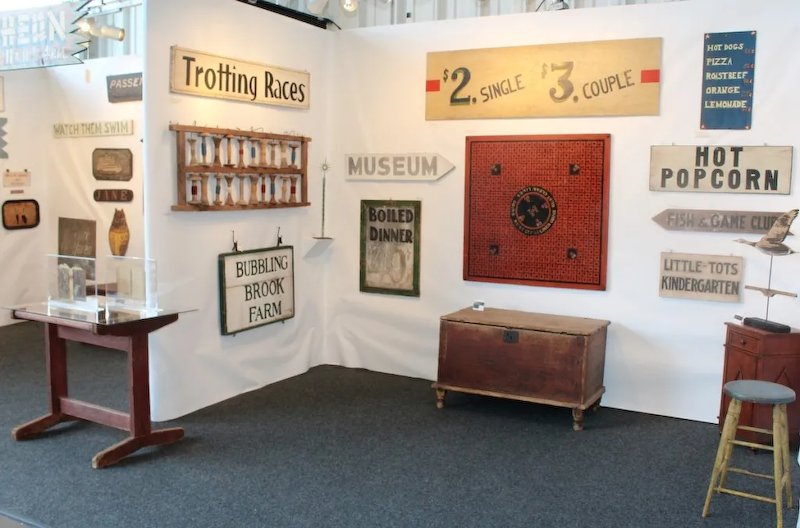 It was a relatively spare look for folk sign specialist Victor Weinblatt, South Hadley, Mass., who nevertheless reported robust sales. “Serious buyers showed up even on Sunday,” he said. “We rewarded them by restocking our walls overnight, but even that became a losing battle.”

Weinblatt also parted with a pair of bufflehead and canvasback ducks from Scituate, Mass., a pair of Nineteenth Century trompe l’oeil watercolors, a Nineteenth Century Newburyport, Mass., ship’s carving, a collection of 28 Ice Cream flavor signs and an airplane weathervane, which he characterized as “in the very best copper verdigris.”

More signs went out the door: “A large, naive Sandwiches diner sign in cadmium yellow, red and white, with the sensibility of a great Modernist painting; a 9-foot Susie’s Kitchen bakery sign, hotly contested by two Susies – one on the telephone; a hilariously incompetent rendering of a Hot Dog, seemingly by a painter who had never seen a hot dog; a Watch Them Swim sign, which had hung above a fish tank in a Massachusetts seafood restaurant; a No Alcohol Beyond This Point sign; and a red Cider sign with naive pointing hand.”

“And those were merely the highlights,” said Weinblatt. “Serious buyers showed up even on Sunday. We rewarded them by restocking our walls overnight, but even that became a losing battle.”

As was the case with the spring show, there was an online component for those unwilling to make the drive to Rhinebeck. A total of 76 dealers participated in Ruby Lane’s online show, according to Alex Gardner, the firm’s marketing and business development manager, who was on hand at Saturday’s opening at the Ruby Lane welcome booth, giving out logoed bags to IRL (in real life) show attendees. The online inventory numbered more than 8,000 items and attracted more than 20,000 page views, he said.

Still, there’s no substitute for seeing antiques, fine art and decorative arts and collectibles up close, and several dealers left Rhinebeck on Sunday with a lighter load. Pictured in this review, for example, are before and after shots of Bruce Emond’s Village Braider booth in which one picture is worth a thousand words. 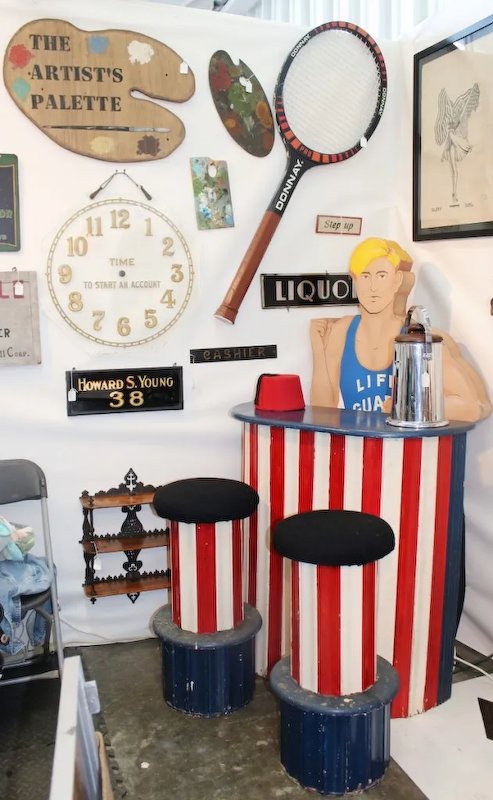 Debbie Turi, Roseland, N.J., showcased a bar and stools in patriotic colors, vintage ice bucket and fez, along with a beefy lifeguard figure she had acquired at auction. Turi is also a show promotor and is making plans for the 75th annual Glen Ridge Antiques Show that will run February 4-5 at the Glen Ridge Congregational Church.

“That Rhinebeck was a bit of a stunner,” said an exhausted but pleased Emond. “There are a few things that you think are going to sell but don’t – like the two camphor chests – but three of my best items were sold during Friday setup and never even made it into the booth. I sold the big copper meridian star that was in the center of the booth to a decorator. There were a bunch of decorators in my booth the minute we opened. Each of them bought a few things. Bottom line is, I sold most of what I brought to Rhinebeck.”

In the back of Emond’s booth was an outsider-y art looking painting of a standing figure that was from the collection of Joseph Shapiro, who was a prominent art collector and philanthropist and founding president of the Museum of Contemporary Art in Chicago. “It was number six in his collection,” said Emond. “That was an important work of art not just because it’s interesting visually, but it had intrinsic importance as being part of his collection. That sold to a decorator who said she was going to keep it for herself.”

Also doing well over the weekend were Anita and Ed Holden of Sherman, Conn. They are Rhinebeck veteran dealers with a spacious, front-facing booth in the middle of Building C. Eye candy in their space included a well-carved Nineteenth or early Twentieth Century carnival horse worked down to the original park paint, an early Nineteenth Century child’s high chair in original green paint and accent decoration, and from a Maine home, a red pine and maple 6-foot harvest table, mid-1900s, 22 inches wide and with 9½-inch leaves. “Given the world and the antiques business as they are, we had a successful show this past weekend,” said Ed Holden in an email. “We sold more than 35 items from a very broad range of material, from paintings to pond sailing boats to ice fishing decoys to a variety of unusual rulers and measuring devices to quilts to decorator sconces to large cast brass candelabras to furniture to folk art items, etc. I think you get the idea of the variety and volume. And I think that variety speaks to the variety of interests for the folks that shop at the Rhinebeck show and what makes Rhinebeck so interesting and special.”

Holden said he usually asks buyers where they come from, “so I can get an idea of the distribution of the attendees. And, true to form, for a successful Rhinebeck they came from northern New Jersey, New York City, southern and central Connecticut and western Massachusetts.” That is in addition to the second-home owners from the surrounding area. “All seemed to be in attendance,” said Holden. “The fall show is generally not as strong as the spring show but still very good if you understand the audience. However, I thought for fall the gate was quite good, both in numbers and quality of real buyers.” 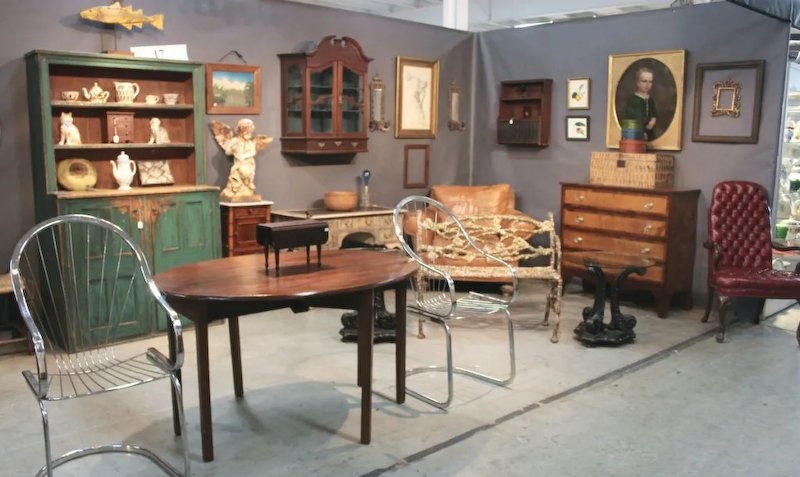 They cleaned up nicely. The pair of Midcentury Modern cantilever chrome chairs by Italian Gastone Rinaldi were last seen on the fields of Brimfield. For Rhinebeck, Limington, Maine, dealer Bethany Kelly incorporated them into a mixed display of Midcentury Modern and early American furniture and decorative arts.

That observation was shared by Bill Hamel, owner of Hamel20, Red Hook, N.Y., who reported that there was a lot of interest in multiple Twentieth Century objects and fine art that he brings to the show. “The gate seemed fairly strong and steady throughout the day on Saturday and I made a number of good sales. People were interested in the colorful acrylic sculptures by Vasa Mihich. There was a lot of interest in the small Pierre Vandel aluminum objects, as well as the Carl Aubock and Swid Powell objects.” Hamel added that Sunday was slower in terms of the gate and for sales. “But social media certainly helps, and my Instagram post of the booth generated a sale of an object on display.”

Black Swan Antiques is the business of Hubert (“Bear”) and Susan Asch van Wyck from Bridgewater, Conn. In addition to antique Dutch tiles, English and European antique furniture and accessories, the couple offers Bear’s bespoke parchment-covered furniture pieces, one of which was showcased on an outside wall of their booth along with a selection of antique prints. “We had a very good show,” they said afterwards. “We sold our Dutch Eighteenth Century table and our English Eighteenth Century gateleg table. We also sold a set of Eighteenth Century Yorkshire spindleback chairs and also a decent amount of smalls: lamps, a large bronze bust, glass vases and a large collection of Eighteenth Century Dutch tiles.

“Frank really does a great job as a promoter and brought really quality dealers to the show. We are already signed up for May 2022.”

Several dealers filled their walls with fine art, including Bill Union, owner of Art & Antique Gallery, Holden, Mass., who, among many artworks, showcased paintings by Bruce Crane, Thaddeus Welch, a George Luks nude and a Kandinsky drawing. “I think the antiques show was pretty well attended,” he observed. “The in and out was much easier than it’s ever been. I think the people were a little afraid to spend a lot of money, but there was a lot of interest. I thought it was a pretty well-run show, one of the best shows Frank has ever done. A good group of people came through. There was very good interest in the Hudson River School landscapes, and there was also some interest in a modern picture. I sold a couple of nice small paintings, and one large one. I had a lot of big paintings, but they bought a bunch of small paintings.” 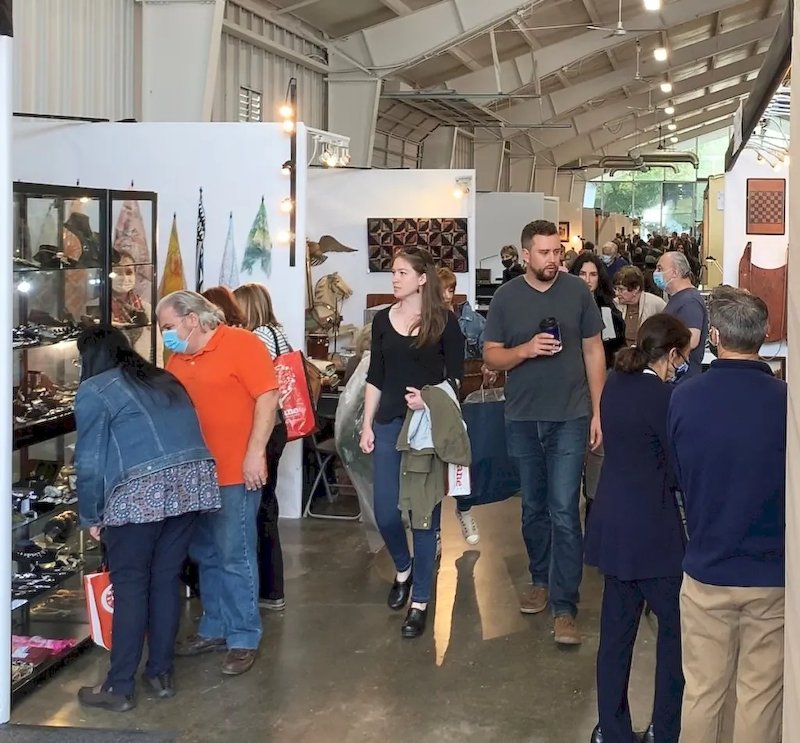 Crowds of shoppers quickly filled the aisles of each of the three buildings to hunt and gather as the show opened. — Alex Gardner photo

Days after the show, Gaglio was busy making deliveries for dealers who had sold large items due to the fact that, as with the spring show, there was no shipper. He spoke to Antiques and The Arts Weekly while delivering a wonderful triptych painting to New York City that Bath, Maine, dealer Peter Murphy sold at the show on Sunday. “Beautiful picture, but it’s big,” said Gaglio, “and it’s a beautiful day to be driving into the city.”

The deliveries are the bookend of what the promoter acknowledges is a big job, starting months and month before the actual event itself. “I think, overall, it went very, smoothly. There’s always a little paper color thing or a track lighting thing, but that’s all part of the preshow setup. I don’t have official numbers yet on the gate, but Saturday attendance was really good. Sunday we had a lot of ‘be-backers’ coming back to the show with their return passes ‑ and they bought. I was glad to see some furniture sell. Most dealers said they sold high-end smalls, decorative arts, so forth.”

Helping to spread the word beforehand is also part of the job. Gaglio used three radio stations – NPR, local station KZE and WDST Radio Woodstock – and hired an independent contractor to do the social media postings on Facebook and Instagram, increasing Barn Star’s number of followers by 300, advertised in local and national trade papers. “I really pulled out all the stops on the local advertising. I did a 25-minute radio interview and ticket giveaway promotion with KZE talking about the show,” said Gaglio, “so I know that word is getting out.”

Antiques at Rhinebeck’s spring edition returns on Memorial Day weekend in 2022. For information, www.barnstar.com or 845-876-0616. 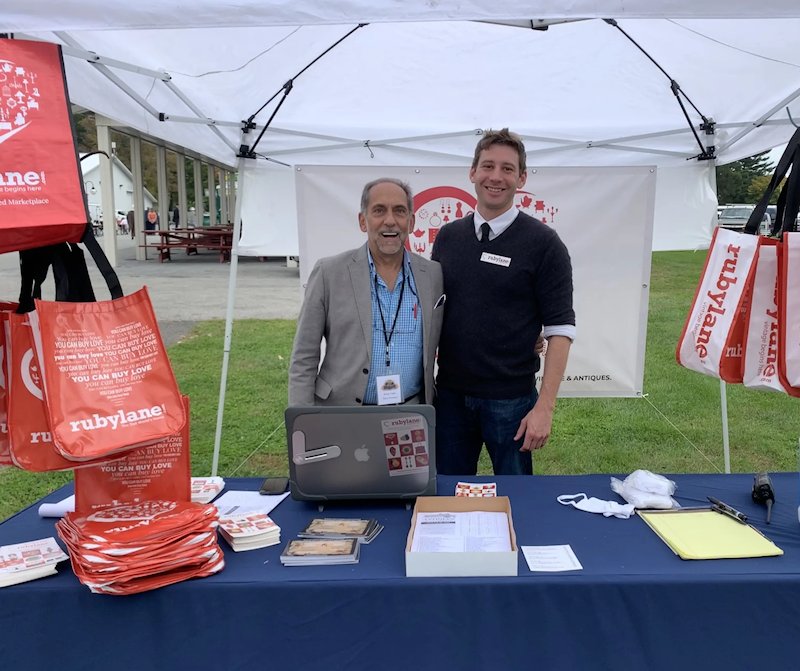