Put On A Happy Face

Posted Wed , Apr 28th, 2021 at 4:29 am
by Ruby Lane
In the realm of doll collecting the Multi-faced doll has always been of special interest to collectors. Doll makers in their never-ending search for novel products have repeatedly turned to variations of multi-faced dolls.

The production of play dolls over the past two-hundred and fifty years has been a highly competitive business. Manufacturers have constantly sought to bring different products to the marketplace in an effort to give them a competitive edge with the buying public. Many of these novelty items actually relied on previous products proving the idiom "everything old is new again."

The earliest known patent for a multi-face doll was granted to Dominico Checkeni and Georg Thompson on February 20, 1866. The patent lists Checkeni, who was from Marion, CT as the inventor. His doll design pertains to the doll's head rotating on an axis or pivot so that the four faces can be revolved vertically. The heads for these dolls were made from a form of rubber (which resembled gutta-percha) which was painted and given a wax outer-coating. In the 1880s dolls from this design were sold with a label stating that they were manufactured and sold by Ozias Morse of West Acton, MA.

In France the firm of Bru Jeune et Cie developed a design for a double-faced doll. They received patent 78844 for a pivoting, double-faced doll on May 19, 1867. Bru produced their 2-faced dolls in a range of sizes from a diminutive all-bisque version to bisque headed dolls as large as a 24" bébé.

France's prestigious Jumeau doll company had a series of character heads sculpted in the 1890s for use on special dolls and automatons. Laughing and crying faces from this 200 series were also used on a double-faced child doll. The faces revolved within the doll's bonnet by turning a knob on the top of their head.

The Dressel, Kister & Co. porcelain factory in Scheibe-Alsbach, Thüringia, Germany was rooted in businesses that began as early as 1835 but it was in 1844 that this company name was initiated when Mr. Dressel and Mr. Kister purchased the concern. It was at that time that doll heads were added to the product line offered by the firm. The factory made a wide range of porcelain products including dolls in both glazed (china) and unglazed finishes (bisque or parian). In 1863 Kister's son took over the operation and the company name changed to A.W. Kister & Co.

From 1880 to 1881 German doll factory owner Fritz Bartenstein of Huttensteinach, Thuringia took out 3 German patents and one US patent pertaining to methods for making double faced socket-head dolls. His design idea employed the use of pull-strings to turn the doll's head to expose each face. Bartenstein dolls have been found with heads of wax, wax-over, composition, or bisque. In 1882 Bartenstein successfully sued Peter Schelhorn for patent infringement over his version of a two-faced doll.

Carl Bergner of Sonneberg, Germany began his doll business in 1890. His factory used heads made for them by Gebrüder Heubach and Simon & Halbig. In 1883 Bergner was part of a committee that founded the Sonneberg Industrial School. In 1904 and '05 Bergner registered his design for doll bodies with changeable faces in Germany (DRGM 248715) and in Britain. His two and three-faced dolls can be found with faces showing three different expressions or in combinations of white, medium brown, and dark brown faces.

Other German companies that made multi-faced dolls include; Hertel Schwab & Co of Stutzhaus, Germany which made double-faced character baby heads (mold 567) for the firm of Kley and Hahn and Max Handwerck of Waltershausen, Thüringia which offered Googlie-eyed dolls depicting WWI soldiers from the Allied Countries.

Throughout the 20th century and into the 21st a number of US patents were received for variations on multi-faced dolls. Some of these are included here, although there were also others:

As previously stated, "everything old is new again," and it seems that the "novelty" of the multi-faced doll will not only continue to reflect the many moods of the consumers and doll makers of the past, but is likely destined to return in future iterations.

We would love to hear from you. Write to us at blogarticles@rubylane.com 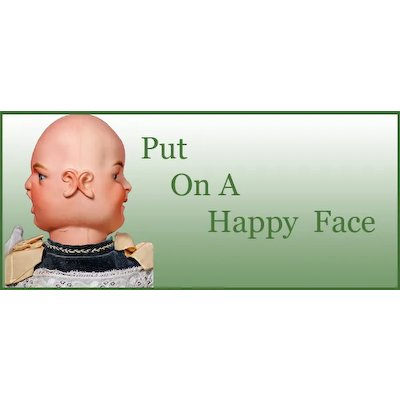