Posted Wed , Apr 28th, 2021 at 5:16 am
by Ruby Lane
For generations hedgehogs have been beloved characters in children's stories and as toys. For the 21st century collector, hedgehogs can be a fun (if not slightly obsessive!) niche within the realm of toy, plush and doll collecting.

Anyone who is a fan of television's Animal Planet channel has undoubtedly noticed that in addition to the pet-world favorites like dogs and cats, other small animals are gaining popularity as pets. Hedgehogs with their prickly coats and amusing ways seem to be gaining interest, perhaps owing to an already fond association with them through children's literature, movies and toys. Unlike their live counterparts (which are not legal as pets in certain US states and various other countries) the hedgehogs of the plush toy animal world are safe, cuddly friends for collectors of all ages.

The concept of anthropomorphized animals has its roots in the earliest days of humankind. Often these figures were used to illustrate concepts about nature and human-being's relationship to the world around them. By the time that fairy tales were being gathered by the Brothers Grimm and Charles Perrault, humanized animal characters were well-known from centuries of folklore fables.One of the tales recorded by the Grimm brothers was that of the Hedgehog and the Hare. In this tale the upper-class hare behaves snobbishly to the humbler hedgehog insisting the hedgehog could not possibly prevail against hare in a race. The hedgehog ultimately turns the tables on the hare through his use of guile. The implied message that those who are looked down on are often more clever than their detractors would not have been lost on the readers of the tale.

From these early tales the hedgehog became entwined with the representation of the common man (or woman). In 1905 Beatrix Potter published The Tale of Mrs. Tiggy-Winkle. Potter's creative mind drew on her sketches of her own pet hedgehog and her long-time acquaintance with a Scottish washer-woman who worked for her family. In her fanciful tale she blended the beauty of the natural world with the most endearing characteristics of a practical working-class woman.

Similarly, the 1908 publication of Kenneth Grahame's Wind in the Willows also includes hedgehogs in various adventures with his other characters. These hedgehogs rooted in the world of imaginary childhood friends, laid the foundations for fond associations with characters of this type.

In the 1930s animated film pioneers, the Diehl Brothers (Paul, Ferdinand and Hermann) of Munich, Germany developed their process for making stop motion films using puppets. In 1936 Ferdinand received a US patent (#2058858) for a method of making replaceable sections for a doll (puppet) face to enable one figure to show many expressions. This was one of many techniques developed by this progressive family of film makers. In 1937 they released their film version of The Race of the Hare and the Hedgehog to great success as the public embraced their hedgehog hero and heroine. The brothers would go on to make a number of films during this period which were enjoyed by both adults and children despite the Third Reich's attempts to use the films to their own agenda.

After the end of WWII Paul and Ferdinand retired and Hermann went on making film shorts, many of which were made for the new government and featured social messages on health, safety and good citizenship. The principal character in his films was Mecki the hedgehog and his family. As a promotional tie-in to his films, sets of postcards showing photos of Mecki in various situations were produced in black and white and later in full color. Mecki's popularity soared. In 1946 an entertainment magazine called Hörzu was debuted and in 1949 the magazine began using Mecki as their mascot. In 1951 The Steiff company obtained licensing to create Mecki and his family as plush toys.

The earlier of the Steiff Mecki toys had felt bodies and limbs, with tipped plush mohair spikes and molded latex faces. In 1961 Steiff began using vinyl for the faces. These famous hedgehogs were made in a wide range of sizes Mecki and his wife Micki have been available in 17, 28, and 50cm sizes (approximately 6 5/8", 11" & 19 5/8"). Their children Macki and Mucki can generally be found in a 12cm (4 ¾") size.

As the 20th and 21st centuries progressed hedgehogs would continue to find favor in the realm of childhood fantasy as new versions of the old stories were brought to both television and film. In the 1980s a stop-motion series of Wind in the Willows was created in Britain. There have been various versions of Beatrix Potter's stories created in film, most notably the 2018 Columbia Pictures (under the Sony Pictures umbrella) movie Peter Rabbit.

Considering the wide array of hedgehog toys, dolls and animals which have been and continue to be offered it is safe to say that hedgehogs have a strong future in the world of collectible toys.

We would love to hear from you. Write to us at blogarticles@rubylane.com 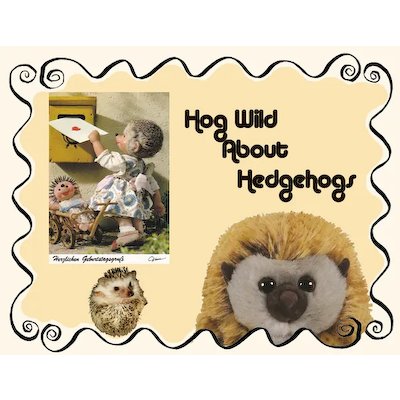